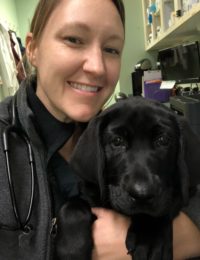 Edie Oliver grew up in the small town of Eupora, MS.  She attended Delta State University in Cleveland, MS where she played 4 years of collegiate softball and received her undergraduate dual degree in Biology/Chemistry.  During that time, she developed a love for animal care while volunteering at the community animal shelter and working at a veterinary clinic during breaks.  She then attended Mississippi State University where she received her DVM in 2014.  On completion of her DVM, Dr. Oliver moved to Huntsville, Al and began practicing emergency medicine full time.  Dr. Oliver moved to Virginia in the summer of 2016.  She has been practicing emergency/critical care medicine as well as general practice since that time.

In her spare time, Dr. Oliver enjoys spending time outdoors with her dogs Lefty and Coach, cooking, traveling, and playing sports. She is a big New Orleans Saints fan!  Her professional interests include soft tissue surgery, wound care and repair, and geriatric care.

We will do our best to accommodate your busy schedule. Schedule an appointment today!

We strive to provide complete care for our patients. Learn more about all the services we provide.

We are committed to providing you with the latest in pet health information.